On the 1st of February I travelled up to London to support my friend Summer and her band Secret Power at their first EP launch. I am very much a book person and not so much a music person, so I felt very uncool and out of my depth (as I often do around cool, talented music folks) but I wanted to support my friend and I think it’s important to try new things! And I’m glad I did, because I had a great time.

It was a very wet Friday evening as I walked from the train station to the venue, and although my big fluffy boots were warm, they were not very waterproof, so it was not long before my feet were soaked through. Once I got inside though, I barely noticed my soggy shoes.

DIY Space for London is an inconspicuous venue – you could walk straight past it and not even notice, especially when it’s dark and snowy out. (Which I totally did, I had to backtrack when Google Maps told me I’d already gone past it!)

It is surprisingly warm inside considering its warehouse-like appearance, and has a very cosy, friendly atmosphere. Run by volunteers, DSFL is an affordable and inclusive community space, and I can’t wait to go back there again. I’ve never been anywhere quite like it! Shortly after I arrived, I spotted Summer at the bar and went over to greet her with a slightly damp hug.

I didn’t have the foresight to have dinner before I left, so I was enormously grateful when Summer offered me a slice of her pizza (intended only for band members) when I arrived. She ordered a drink and then showed me through to the main performance area, which she and the band had decorated with roses, bunting, and lots of cute pink stuff.

She introduced me to her bandmates Jess and Peter, but I had a dripping umbrella in one hand and half a slice of pizza in the other, so I was a bit of an awkward mess and couldn’t shake anyone’s hand or whatever normal humans do to greet each other. They were super lovely and welcoming, though, which immediately put me at ease.

There was a merch table at the side of the room, and it was as cutely decorated as the rest of the place, with pink balloons and roses. Summer spent a large chunk of the evening running the merch stand, and I stood behind it with her to keep her company (and also because I am extremely socially awkward and she was the only person there that I knew!)

One of the first things I did once I’d put down my coat and umbrella was raid that merch stand. I got one of everything – tote bag, t-shirt, lyric zine, all of it! I got two copies of their EP for friends, as I’d already pre-ordered mine online. Summer is an artist as well as a musician, and worked on the designs for all the super cute merch – and she also designed The Star Jar’s logo!

There were two other bands playing before Secret Power took the stage. The first of these was Whitelands, a “bedroom dreampop and shoegaze” band. They were crazy talented and had such a great sound – I was going to buy their tape but I’d already blown all my cash on Secret Power merch! Luckily a lot of their music is available online (check out the links at the bottom of this post).

The next band to play was Lizard Horse, a “spiky bi-furious feminist pop band based in London”. They had a really strong performance and you could tell they were having loads of fun with it. They had some brilliant songs with hilarious and very memorable lyrics that had me and Summer in stitches. I think my favourite track of theirs is “My Mooncup Got Stuck”, if that’s any indication!

I took a couple of pictures of Summer and her band with my Instax camera – I don’t get to use it very often and this was definitely a special occasion worth breaking it out for! I wanted to get a snap of them all together before they went on, as I wasn’t sure how long I’d be able to stay after they finished. It came out really cute! 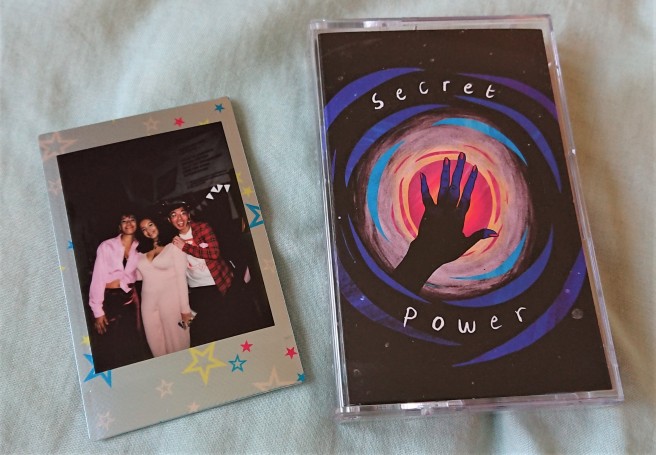 When Secret Power went on, they opened with two new songs before *launching* into the tracks on the EP (geddit? Because it’s their EP launch??) and they were great! Before long the crowd was cheering and dancing and having a fab time. I knew a few of their songs already because I’d downloaded my digital copy of the EP that morning, and it was so great to hear them performed live!

The crowd loved them so much that, at the end, they demanded one more song. I was so proud of my pal Summer and I was grinning like an idiot the whole time; my face was sore from smiling by the end of the night.

If you couldn’t make it to the EP launch, Secret Power are going on tour next week! You can find all the details of their tour here. This is a band you don’t want to miss!

Check out their music and follow them on social media: